The Goodness of God Pursues Us Even When… 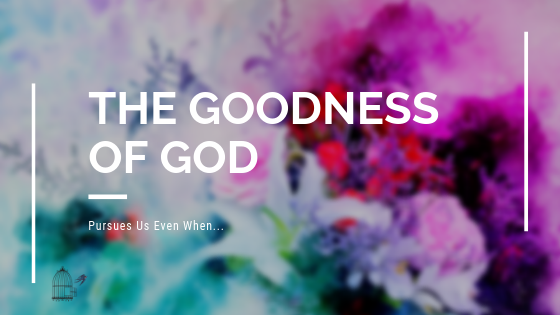 I was listening to a Jennifer Johnson song this morning called Goodness of God. It was the stripped-down version, which I love. Something about a guitar and minimal instruments and worship pull me in.

Anyway. I started thinking about the Goodness of God as she sang. And I found myself in a quick highlight reel of my life. It wasn’t the “good stuff” either. It was what I would call the no good, terrible, awful times in my life.

You might be asking “How could the no good, terrible, awful moments apply to the goodness of God? I thought He was good.”

Well. He is. But hang tight. I’ll get there. Back to the song.

Jenn Johnson begins the song with “I love you, Lord.” Before anything else, she begins with a profession of love. She then goes on to say how He’s always been faithful and so so good. This is where the highlight reel begins and I start seeing those little moments. And, even when I see them, I see His goodness.

Even when at 3 when I was sexually abused by a cousin. His goodness pursued me.

Even when my dad was shot on the job and we lost everything, boiled water on the stove to take a bath, and no phone. We experienced financial trouble in a real way. His goodness pursued me.

Even at 12 when I walked in on my dad’s attempted suicide. And not long after, I learned he had a drug addiction problem. His goodness pursued me.

Even as a teen when our home was shaken each moment like one of those fortune ball things. You never knew what each moment held. You just closed your eyes and hoped that this time it would land on one of the happy triangles. His goodness pursued me.

Even when my dad was violent and scary because of his drug addiction. When you didn’t know if you were getting Jekyll or Hyde, or when the police would show up at the door, or when the kids at school would find out what was going on in your home. His goodness pursued me.

Even when in the 10th grade I was tormented every day at school by a group of girls over a boy. His goodness pursued me.

Even when I thought, fantasized, begged for, and planned my death almost every day. His goodness pursued me.

Even when I was raped at 17 by someone I called a friend. His goodness pursued me.

Even when I got pregnant at 18 by another friend and had an abortion. His goodness pursued me.

Even when my early twenties were full of self-destructive behavior (drugs, confusion about my sexual orientation, and more). His goodness pursued me.

Even when my first marriage fell apart because he fell in love with my best friend and had an affair. His goodness pursued me.

Even when my 2-year-old son and I left him and spent the next year battling over custody. His goodness pursued me.

Even in the most painful moments in life, the goodness of God was present. In each of those moments, the ones that shape us, His goodness is there.  And that was before I ever let Him into my heart.

The Goodness of God

God’s goodness grieved with 3-year old me and led me to tell my mom.

His goodness sustained us and provided what we needed.

His goodness saved my dad’s life.

His goodness sprinkled good days and memories in with the scary ones.

His goodness strengthened me to walk down the halls and prepared me for persecution.

His goodness stopped me from going through with killing myself. I heard His voice before I knew who was speaking. He told me how precious I was.

His goodness shook with anger as His daughter was sinned against. Thankfully, He also removed the moment-by-moment details of being violated.

His goodness forgave me and redeemed this murderer.

His goodness pursued me in my destruction. I ran and ran, but He waited in the wings to catch me.

His goodness led me to a beautiful man, marriage, and a family I never dreamed I deserved.

His goodness is wrapped up in the middle of each of those moments, before they happened, during them, and after.

It’s All Mixed In

It’s like that movie Inside Out. Joy doesn’t realize that a little bit of sadness is mixed in each memory. All she focuses on is the joy. And the same for sadness. All Sadness sees in front of her is the pain and hurt.

But, if you look at the whole memory, joy, and the other emotions are all mixed within the moment making a rainbow-colored memory. THAT’S the goodness of God. He’s the joy parts blended in each memory of sadness, anger, disgust, and fear. And as we travel through life, all those emotions get mixed together, sometimes from moment to moment.

That’s what Satan did to me.

While I was going through ALLLLLLL those things I mentioned above, I didn’t see the goodness of God. All I saw and felt was sadness, anger, disgust, and fear. It actually convinced me more that God didn’t exist, or he did and He was a colossal jerk unconcerned about what was happening to me. That’s what satan WANTED me to see and think. And it’s what he wants YOU to see and think. It’s where he wants you to focus on. That’s why He brings it to the forefront of your mind and clouds the joyful parts.

Even When Cancer Showed Up

Even when cancer showed up in my body this past May and the uncertainty of what’s to come swirled in my head. Even when the anxiety and exhaustion hit through the treatments. In those moments, I grabbed hold of the memory ball and allowed my gaze to fall on each of the colors knowing that His goodness is mixed in.

His goodness gave me peace in the diagnosis, treatment, and recovery process that I’m still walking through. My outcome could’ve been the worst-case scenario, but it wasn’t. HIS GOODNESS!

And even if the worse had been my story, I would’ve done the same thing I did in the best outcome, focus on His goodness.

But God’s goodness ever pursues us in each and every moment. He’s hoping you’ll pick up that little memory ball and twirl it around until you see that yellow spot, touch it, and SEE where His goodness was in it. It’s there! I promise.

All Five are Needed

Throughout the whole movie, Joy tries to keep Sadness (and the other emotions) from taking control of Riley (the little girl). But during the scene toward the end of the movie, the five realize that sadness is needed, that they are all needed.

All the emotions are necessary for Riley to grow into who she will become and move into the next season of life. I love this part of the movie because it shows how each emotion plays a part in core memories that shape Riley.

I’m so thankful for all of those experiences, painful as they were. I wouldn’t change a single one.

Because, now when I take them out to examine them, I see His goodness. It shines brighter in each one, brighter than the sadness, anger, disgust, and fear.

I can look back at those memories and say “Here. Do you see right here? THIS is where my God showed up.” And my faith is strengthened.

Don’t let the enemy steal the goodness of God from you. Find the yellow in the memory and grab hold of it. Thank Him for ALL OF IT, the good AND the no good, terrible, awful parts of it. Because without those messy parts, you would miss the goodness of God!

My Prayer for You

Lord, I pray over each person reading this right now. I thank you for their struggles, trials, and hurts. I thank you for their childhood, teens, young adult years, and beyond. I praise you for those core memories, the good and the bad, that have molded them in each season. I ask you, Lord Jesus, to reveal to their minds right now the yellows spots where you showed up. Give them the grace to pull up that memory without it wrecking them or beating them down. Help them to embrace all of the memory with love and gratitude. Let it build their faith to say boldly with free and joyful hearts “Here. Do you see right here? THIS is where my God showed up.”

Here’s the song. I dare you to open it. Ask the Lord to show you. Listen to the song and let your highlight reel run. God bless you, friends!

Thank you for liking and sharing my blog.